Ball Bearing (BB) guns are incredibly popular and can be great fun. However, you do need to weigh up the dangers and risks of using a bb gun with the pleasure and life-skills the usage will bring.

But what’s the recommended age for someone to starting using a BB gun? The answer actually depends on two things, firstly any laws that prevent ownership in your location and secondly the maturity of the child. The short answer to the question though is, “as soon as they are mature enough.”. In the UK there are greater restrictions on ownership and you can’t legally use one until you’re 14 (and you have to be supervised), in the US (although it does depend on the state) restrictions are more relaxed.

Contents hide
1 What’s the recommended age for a bb gun?
1.1 Benefits of using an airgun at an early age
2 How can I make sure they are safe?
2.1 Safety goggles
2.2 Backstop
2.3 Pointing the gun down
2.4 Supervision
2.5 Safety Catch
2.6 Trigger Finger
2.7 Don’t run
3 Do they need to use any safety equipment?
4 What type of BB gun would be best for the child?
5 Final Thoughts:

What’s the recommended age for a bb gun?

Benefits of using an airgun at an early age

There are many benefits to introducing the use of airguns to anyone at a young age, as long as they are safe and show some respect for their environment. It will give them a focus, a hobby. You will find they are less likely to spend so much time on the game console and more time outside, which is great. You’ll find that just being outside will lead them into other activities, such as making camps and fires.

If you, as a parent, need to bond more with your child then this is a great way to do it as you’ll end up spending a lot more quality time with them.

Another strong reason to introduce children at a younger age to airguns is that it will teach them respect for the weapon at an early age. They’ll learn to respect it. You’ll find that when they’re older and shooting higher caliber weapons they’ll not only be safer with it but they’ll be more confident with it.

Also, I don’t know about you but I’d rather I taught my son about safety around airguns myself rather than they learn from their mates when they’re older. Get the basics done at an early age and they won’t forget it. It’s like swimming, you teach them how to do it at an early age so it comes more naturally to them, it’s just common sense.

How can I make sure they are safe?

I know, I know – the boring bit, right? Yep, maybe – but just get this stuff embedded into the child’s psyche so they do it by instinct. That way you won’t have to keep going over it every time!

Remember that they are still children and have not matured yet, which is fine as this is what being a child is all about. They’re not meant to be mature yet, they’ll have plenty of time for that when they’re older!

There are some things you should do to make sure your child is safe when using an airgun: 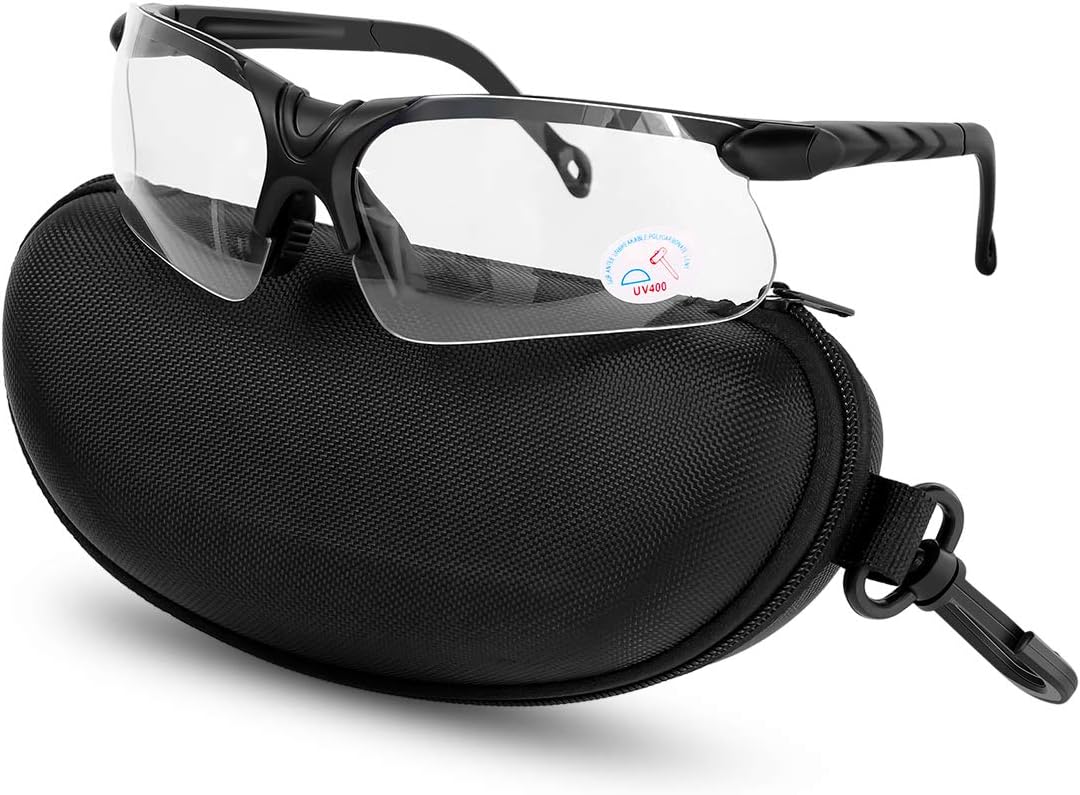 If you’re practicing target shooting then occasionally a pellet/ball bearing can bounce off your target and come back in your direction.

Last week I was shooting with my son a .177 when a pellet hit a target, bounced back and struck me quite hard on the side of the head. It didn’t penetrate but I was glad it didn’t hit me in the eye as stupidly I wasn’t wearing any at the time. So, goggles should always be worn, especially by the child.

When training your child to shoot, whatever they’re aiming at should have a decent backstop behind the target. They will miss a fair amount of time most likely and you may not be in an environment where you want ball bearings being sprayed in all directions.

A lot of people just stick a piece of wood behind the target but this isn’t a great idea as it happens. The intention was good, yes, but the application, not so good.

Pellets and BB’s can bounce back off wood and end up coming straight back towards you so try not to use them if possible. Try concrete or stone, this will actually remove all the energy from the BB, totally destroying it.

Pointing the gun down

Ensure that as your child is carrying the weapon, make sure that not only the safety is on and their finger isn’t on the trigger but also ensure that the gun is pointing down and they should never point it at anyone, even if they think it’s not loaded, etc.

If your child is young (arguably if they are under 18 and depending on your local laws) you should always be present when your child is shooting. It doesn’t mean you need to be in their faces all the time as if you do this will soon put them off the sport, give them a little space. Watch what they’re doing though and make sure they’re getting the basics right.

If they make a mistake, don’t get cross, just correct them and if they continue you’ll need to give them a warning. At the end of the day, if they’re not safe and comfortable with the basics then they’re not old enough and/or mature enough just yet.

A part of your training for the child will include instructions on what the purpose of the safety catch is, where it is and how to operate it. They should be taught to always engage the safety once they have finished shooting and always make sure they know only to release it when they are in their shooting position, about to shoot.

It should form part of their second nature when they’re ready to shoot, release the safety and put your finger in the correct position on the trigger.

I hate stating the obvious but I guess I should make this list complete now I’ve started! It’s also meant to be quite comprehensive so no point leaving this one out. So here it is. Make sure they learn they shouldn’t run with an airgun, loaded or not.

This way there’s less risk of them falling over on an exposed tree-root, which always seems to happen in horror films, have you noticed that? Finally here, if you want to know how dangerous BB guns can be, take a look at the article here

Do they need to use any safety equipment?

You don’t actually need that much when it comes to safety equipment. The safety is mostly managed via training and responsible use of the weapon.

However, there are a couple of things you should definitely have. The safety glasses and backstop for the ball bearings are a must-have.

If your child initially feels a bit exposed when shooting, they may feel more comfortable if they are shooting from behind something. We initially used some garden furniture. This also has the added advantage that they can rest the gun on the furniture, which helps improve accuracy. If they’re more accurate initially and actually hitting the thing they’re aiming at then you’ll find they’re more enthusiastic about it as a whole.

What type of BB gun would be best for the child?

Initially, you’ll want to get a low-powered model that accommodates a .177 round. There are a few things you should consider when looking for a beginner BB gun:

Personally, I would go for something like the Remington AM77X, you can check the price on Amazon. What I like about this is it’s manufactured by a well know company and can use either BB’s or pellets. It’s an ideal beginner shooter and will keep your child (and you) happy for some time. 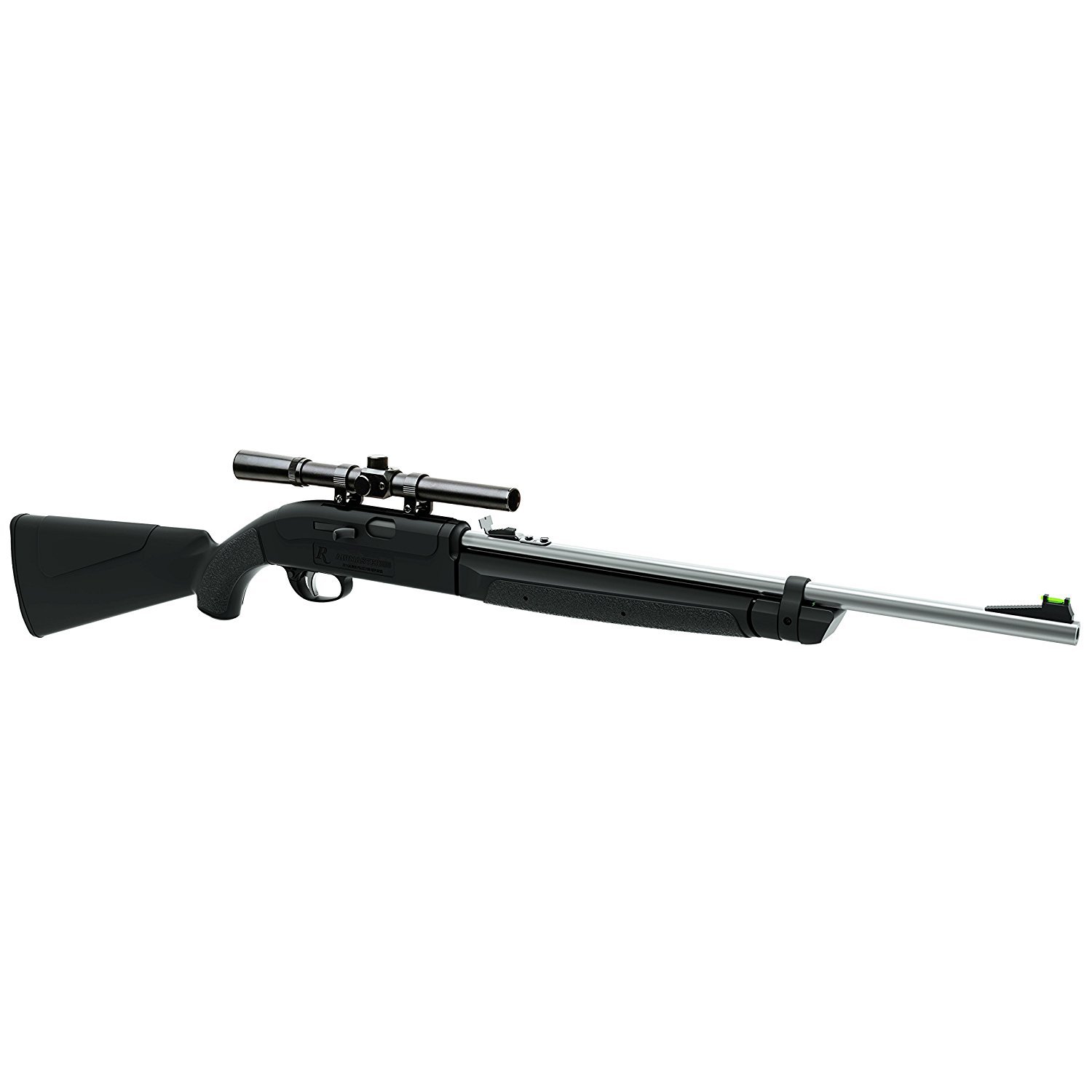 This was always going to be a post that not everyone agreed with. At what age you start introducing your child to airguns (if indeed you ever do) is very much a personal thing and also depends a lot on where you live.

The laws of the country, the amount of space you have to be able to practice regularly without having to travel far and the maturity of the child are all factors.

The main thing though is to keep it fun, keep it challenging (try changing the targets every so often) and of course, keep it safe. I’d love to hear from you about this. I’m fascinated by how different people from different backgrounds and countries introduce their child to shooting and how they do it.

Let me know what challenges you’ve faced in the comments below, I’ll respond to everyone I get!

If you’d like to take a look at my recommended BB Guns then check out: Best BB Gun 2023