Recently, my son and I were in an airgun shop looking at all the varieties of weapons available to us these days. It dawned on me that there are a lot of choices these days and how difficult it must be for someone just getting into the sport to know what type of airguns are available and also what type would be best for them. So I thought I’d make a guide just to help answer the question, ‘What types of airgun can I buy?”

The above gun-types will be explored more in this article, including the advantages and disadvantages of each type. Depending on who the gun is for, how much experience they have and what they want to use it for will ultimately decide on which direction is taken.

What are the Types of Air Rifles?

If you’re new to airguns (or guns in general) it may be worth just providing you with a few commonly used words that you may not be familiar with and will help you understand this content.

Sear – Part of the trigger mechanism that contains the hammer back until enough pressure is applied to the trigger, at which point the hammer is released.

You’ll recognize this type of gun most likely, it’s where you seem to break the gun in two by ‘snapping’ the barrel down whilst holding the stock. This process moves the piston back and compresses the spring whilst engaging the trigger sear to lock it into place until you want to fire.

The pellet is inserted straight into the breach before you pull the barrel back up to its original position, locking it in place. Assuming the safety is on you can then just pull the trigger and the piston will be released. The spring and the piston are forced forward which propels the pellet out of the barrel and (hopefully) into your target.

Not all spring-piston airguns are primed by pulling down on the barrel though. Some use a lever (either on the side or top) but they all do fundamentally work the same way.

The power required to propel the pellet out of the barrel is produced by a piston that compresses the air in front of it. Typically, a spring is used to force this piston forward when the trigger is pulled, however, a compressed gas canister can serve the same purpose.

When the piston moves backward, air follows it into a chamber (that sits in front of it) – this is known as the compression chamber and is where the pellet will sit before firing. This pellet, when loaded creates an air-tight seal.

The piston, as it moves forward towards the pellet, compresses the air. The air can’t escape as the pellet has formed this air-tight seal. When the trigger is pulled and the piston moves forward the air pressure gets to a point where it overcomes the resistance caused by the pellet. The pellet is then propelled forward by the compressed air at high speed.

One thing to bear in mind if you have a springer, you shouldn’t dry-fire it! If you’re not sure what this is or why you shouldn’t, then check out my article here.

There are some great advantages to opting for one of these types: 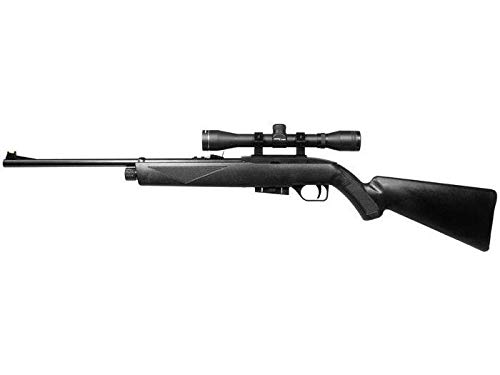 There are quite a few slightly different guns that fit under this category, however, all of them require a canister of CO2 to power the projectile out of the barrel. There are even different sizes of the CO2 canister that are used although the most popular does seem to be the 12g canister.

This process is actually the same as how PCP guns work in many ways. A spring is first compressed and then when the trigger is pulled it releases a small valve in this CO2 reservoir for a split second. The gas is ejected down the barrel and sends the pellet on its way.

The gas itself is stored as a liquid inside the capsule and depending on the size of the canister, you will get around 60 shots for the typical 12g capsule and around 220 for an 88g size.

CO2 powered airguns have become increasingly popular recently and I think this is mainly due to the type of gun that the power source allows you to use.

Interesting fact coming up – did you know that carbon dioxide has been used to power airguns since the latter part of the 19th century? No, nor did I. There’s something to amuse your friends with over dinner next time there’s an awkward silence in the conversation.

Anyway, I recently bought a Sig MPX Semi-Automatic that is powered by the 88g CO2 containers. It’s only a short video but you can check it out here over short-range:

Simply put, these guns will use compressed air to fire the pellet. Now, there are a few different types of pneumatic out there and it is this that depends on how the air is actually compressed. I believe the most common is known as the multi-stroke.

To get the air to be compressed you need to pump a lever several times to increase the pressure to the required amount. Each pump of the lever is slightly harder than the last and this makes it not the greatest gun for the younger shooter.

There are other types as well, such as the single-stroke pneumatic airgun. As you can probably gather from the name, this gun requires just one pump to compress the air required for shooting. Although some people find this type of gun more favorable to the multi-stroke, there are problems with accuracy and poor power – although over short-ranges (such as 10 meters) it’s actually quite acceptable.

The third form of the pneumatic gun is known as the Pre-Charged Pneumatic (PCP). This gun gives you the ability to control the amount of power you want to be delivered.

Although accurate, you need to get the air pressurized in them using a separate tank, like a tank that a scuba diver would wear for instance. Or, you can use a hand or foot pump.

This air is then collected into a reservoir within the airgun itself until a tiny amount is required when you pull the trigger. Bear in mind that to get the psi up to around 2000, you’ll need around 40 pumps of your average hand pump, that’s quite a bit. Although you’ll have a psi gauge on the pump itself, there will also be one on the gun itself, which you should double-check.

If you’re in any doubt how much effort this requires, do take a look here (the video also shows how to fill from a tank):

These airguns are actually quite similar to the spring-action airguns. The gas-ram works slightly different though as it not only compresses a piston but also an amount of compressed air that is contained in a cylinder.

When the trigger is pulled, this compressed air expands back to its original volume which in-turn forces the piston forward and then forces the air forward into the compression chamber. This, finally, ejects the pellet down the barrel. The compressed air though isn’t lost and actually remains in the gas-ram which can be used continually.

So, you may gather from the above that there are very few disadvantages to a gas ram airgun. In fact, the disadvantages I’ve mentioned above aren’t major. There’s no doubt really that the Gas-Ram is a very attractive airgun, with so many advantages over the other types it could well be my choice for the beginner.

If you have any comments about the above opinion I’d genuinely love to hear from you. I appreciate that different people will have different priorities in their gun so if you have a different view then let’s discuss below!

If you’re not sure what type of pellets you should be using, then check out the article here that will tell you everything you need to know!