Of course, this is my opinion but I’ve been doing this stuff for long enough now and I wouldn’t recommend anything I wouldn’t (and haven’t) used myself.

In making my choices I’ve taken a lot of things into account:

What you also don’t realize when you’re first looking for a rifle is that, although there are a lot of rifles out there, many are just re-labeled copies and most haven’t been tried and tested.

I’m not interested in those which is why I’ve just listed the five below. I don’t have any confidence in the rest! Even better news, I’ve done the research for you and can make the below recommendations.

You won’t be disappointed with any of these so you can really take your pick. However, I do have a favorite and I explain in the end why.

Just look at the craftsmanship on this thing. It is a thing of beauty. It may not be cheap but, as the saying goes, you get what you pay for. And you surely get a lot when you pull the trigger with this one.

The RWS model 54 is a .22 caliber precision Air Rifle. You tend to know when you’re buying something made by RWS that you’re buying into a quality brand.

This rifle doesn’t have the typical break-barrel you’d expect on a rifle like this but a side-lever, so the barrel is fixed. No more need to put pressure on the barrel at any time.

It also incorporates a floating action system that was developed to absorb some of the shocks from the piston and it can, therefore, release the pellet before it has been impacted by any vibration. Awesome, right?

It does dome with a scope, of course, a very capable 4×32 unit, or of course, you can take it off and shoot using the adjustable built-in sights. 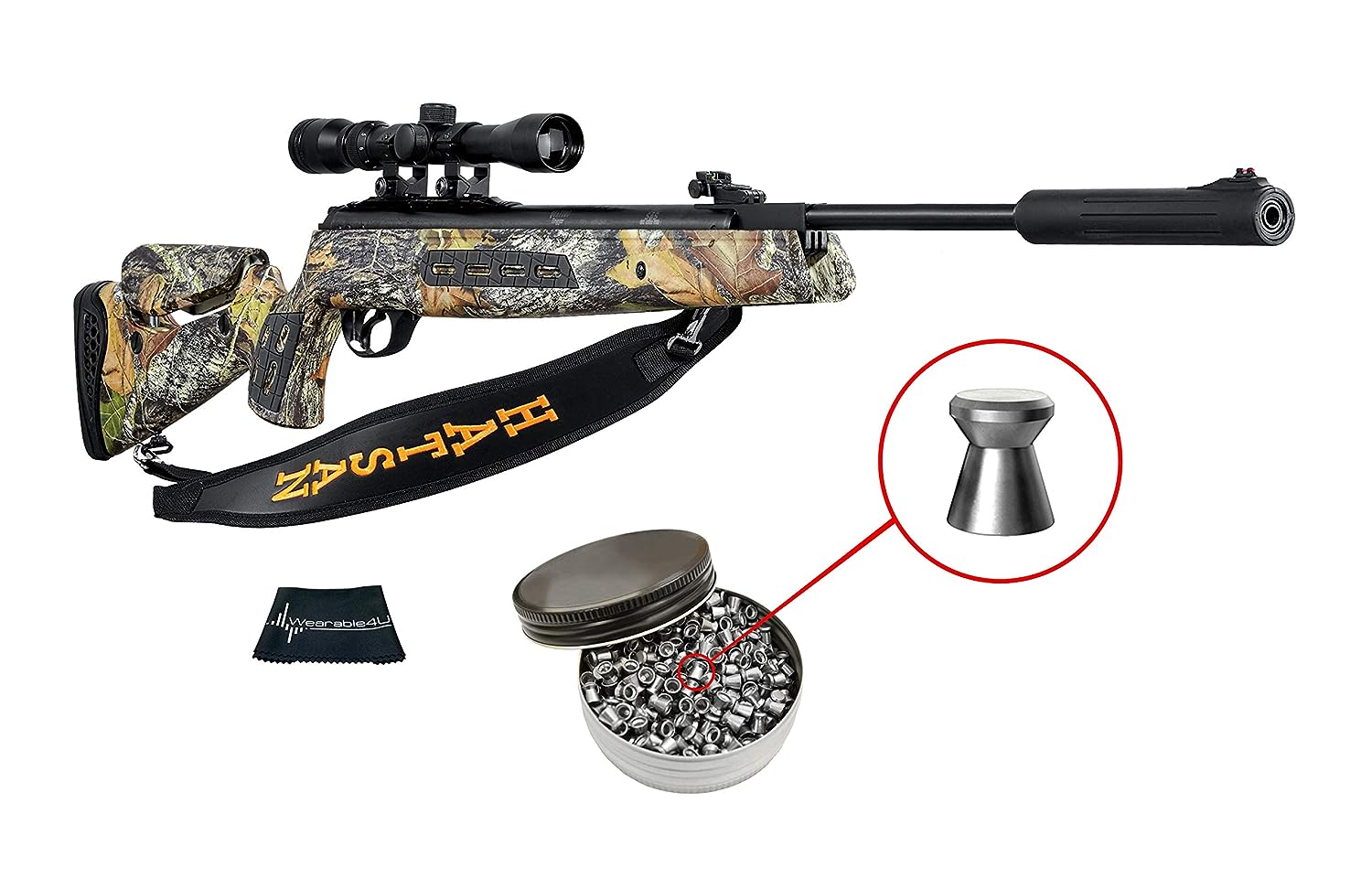 The Hatsan 125 Sniper Rifle may not be everyone’s cup of tea but it had enough positives to be included in this list.

Firstly, there are a few different color schemes available for this spring piston air rifle but I particularly liked the camouflage so that’s the photo I’ve included here.

Firstly, it looks awesome, the silencer on the end of the barrel just completing the look. I know if I was to ask my 11-year-old which rifle he’d choose, it would be this one, purely on looks. Although it’s been a long time since I’ve been 11, arguably my mental age is not much higher than this so that might be why I agree with him.

The Hatsan claims to have velocities of 1,200 fps for alloy and 1,000 fps for lead pellets with maximum energy produced of 31 ft. lbs. It’s got a great Weaver optics TruGlo fiber optic front sight and a fully adjustable TruGlo rear sight.

You also get a shock absorber system that’s been shown to significantly reduce vibration and is also available in other calibers (.177, .22 and .25).

Lastly, the price – the Hatsan is definitely on the cheaper side and with its looks, features, and as per public reviews, this rifle is quality. 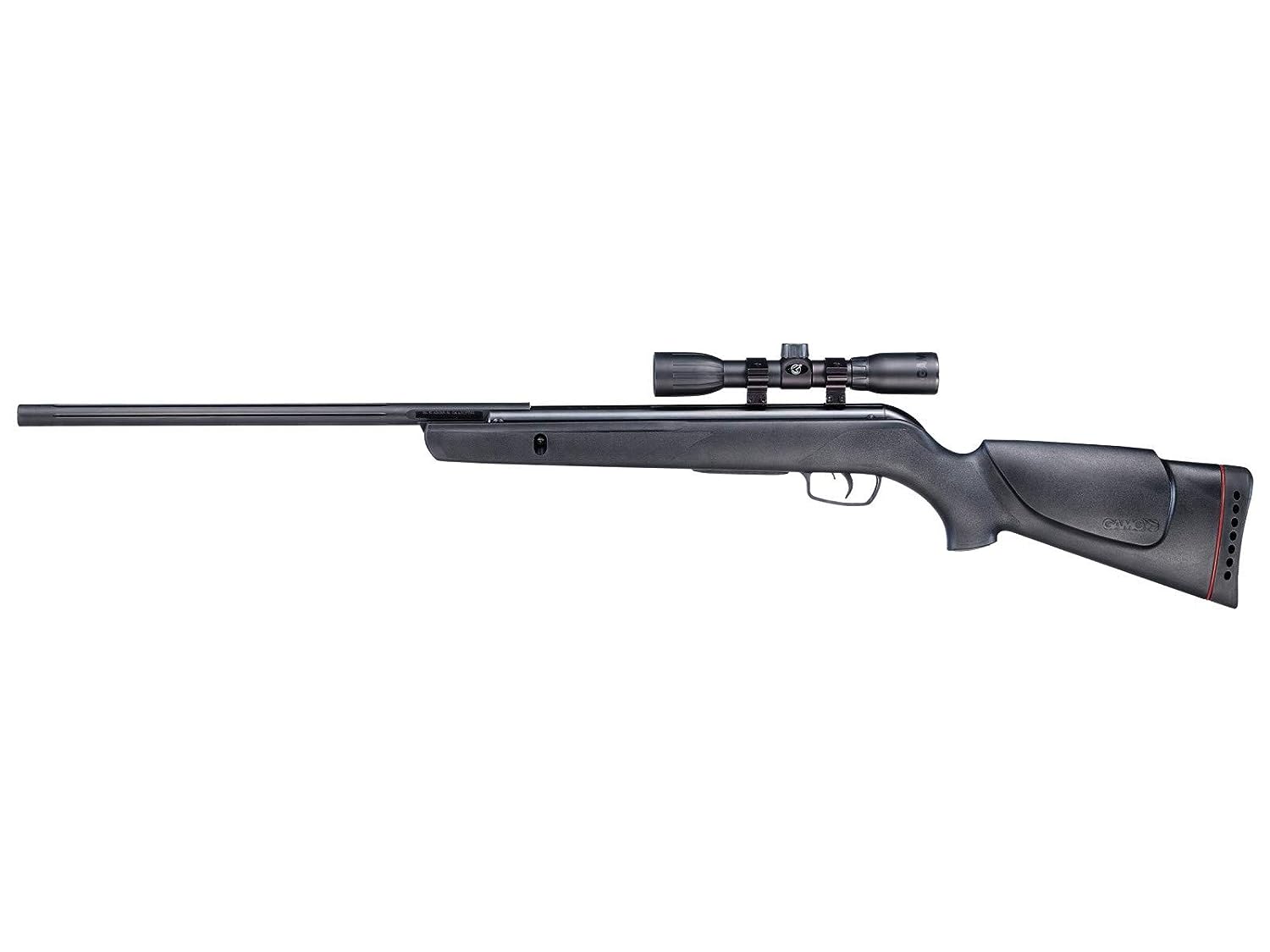 I like the Gamo brand. They’re well known for allowing their guns to be dry-fired. It’s not recommended but they do allow it, see their statement on their website here.

If you’re not sure what ‘dry firing‘ an airgun means, be sure to check out my article on it here.

This makes it a very good gun for the beginner, who may initially make a few mistakes! Don’t be fooled into thinking this is little more than a toy though.

The Gamo is a very capable spring piston air rifle.

It’s of the break-barrel variety and is capable of velocities of up to 1250 fps. Whether you’d actually obtain those numbers under scrutiny is another question, but it certainly does deliver some speed.

The Rifle comes with a 4 x 32 shockproof scope and an ambidextrous stock for all you lefties out there!

A higher caliber rifle than the Gamo, this .22 will pack slightly more punch. It certainly looks the part also with an almost stealthy appearance.

The Ruger is capable of high-velocities, advertising 1200 fps for alloy pellets. Although it’s of a higher caliber don’t think you’ll be deafened when shooting.

The Umarex Ruger has the SilencAir Noise Dampening System which really does decrease the ‘bang’. This is something that may please your first-time or younger shooter.

Not to be out-done by the Gamo, the Umarex also comes with a scope, a 3-9×32 variety, and an adjustable 2-stage trigger.

The reviews for the Crosman tell you pretty much all you need to know. Check it out on Amazon (or elsewhere), consistent excellent feedback.

The Optimus is a .22 caliber break-barrel that will shoot up to 950 fps.

All three of these guns are actually similar in velocity but I wouldn’t get caught up too much in the numbers here. These speeds are more than enough for the time of person interested in these rifles.

Like the other two rifles, the Crosman comes with a decent 4×32 precision scope. Nice, simple looks with a solid support and reliability history make this an incredibly popular choice for those just getting into the sport.

Why I chose the RWS Model 54 as the best spring piston air rifle?

When you hold it, the thing just oozes quality. It will out-live you, your house and possibly the planet. It has a great illuminated scope and a bear trap to save any accidents when cocking.

At the end of the day, if you’re looking for an Air Rifle I’m not sure you can get any better than this.

Why I chose the Gamo Varmint Air Rifle as the best budget pick?

These are all great guns and you really wouldn’t be disappointed if you went for any of them. However, I had to choose one (for my son as it happens) and went for the Gamo.

Why did I do this?

So, there you have it, my recommendations for the Best Spring Piston Air Rifles. There are others of course but at the moment, these are my favorites.