PCP (Pre-Charged Pneumatics) Air Rifles use compressed air to fire the pellet out of the barrel.

The air is compressed to around 3000 psi by using a hand-pump, scuba tank or some other method. Once the gun is filled to the correct pressure it is ready for use!

Simply put, when you pull on the trigger a tiny amount of air is released through a valve which pushes the pellet out of the rifle. This continues until the air pressure is too low for use, at which point it needs to be filled up again.

Over many, many years I’ve used a number of Air Rifles and I know how difficult it can be when you’re looking. If you’re looking for a PCP Air Rifle and you’re either on a tight budget or perhaps it’s your (or someone else’s) first gun then take a look at the PCP Air Rifles below.

All of these are very good and you won’t be disappointed with whatever you buy. I had to choose a favorite though and to do this I looked at the following things.

The PCP Air Rifle is becoming more and more popular these days and there are some awesome rifles now on the market. All of the below are great guns, I have a favorite of course, which I mention below but you can’t go wrong with any of these.

What to look for in PCP Air Rifle?

There are a few things I’m looking for when searching for a PCP Air Rifle:

When using .177 pellets it has the capability to function as a 10-shot repeater with auto-indexing (with .25 cal it is an 8-shot repeater).

One of the reasons why I like the Marauder is it’s deceptively quiet considering its power. Although this rifle doesn’t come with a scope, it does have a standard 11mm rail so you easily add your favorite.

There are also a few upgrades that this gun has had from the original (which was also very good) such as a factory-installed ‘de-pinger’ which alters the typical sharp ping you’ll hear when firing to a dull thud.

For the price of this Rifle, you are getting a seriously capable weapon.

It has an air reservoir of 135cc and you have the choice of filling either via a scuba tank or indeed using a hand pump. It’s obvious that Crosman is trying to make it easier for users to fill these rifles with air and I love the fact that you can use either CO2 or compressed air with this.

Not only that but it’s a lovely looking gun which has a nice hardwood stock.

Benjamin BPBD3S Bulldog .357 PCP Air Rifle is for the more serious of us shooters for sure.

This is a high caliber big-game hunting Rifle that has some big stopping power behind it. Its performance matches its looks, aggressive.

We’re going a little beyond your typical Air Rifle here, taking a step up. This thing will take down some large animals. It’s not all muscle though, the Bulldog has a nice baffle-less shroud to reduce noise output. If you’re left-handed this won’t present a problem as the side lever bolt is reversible.

It has a 10-shot per fill capability and comes with a nice cleaning tool, bullets, and lubricant. It’s not the fastest of rifles (output wise) at around 800 fps but that’s not why you’d be buying this thing, you’re buying the Bulldog for its stopping power.

Mind you, it looks pretty awesome too, right?

The Beeman QB Chief is a sturdy looking beast that won’t leave you disappointed. A hefty 50-shot capacity for .177 caliber or 35 for .22’s mean you won’t have to be constantly reloading.

The Beeman is a bolt-action single-shot Air Rifle which features a 2-stage adjustable trigger and a hardwood stock. It has fiber-optic front and rear sights and a rifled barrel.

Although this is an entry-level PCP Air Rifle, it is not devoid of quality. 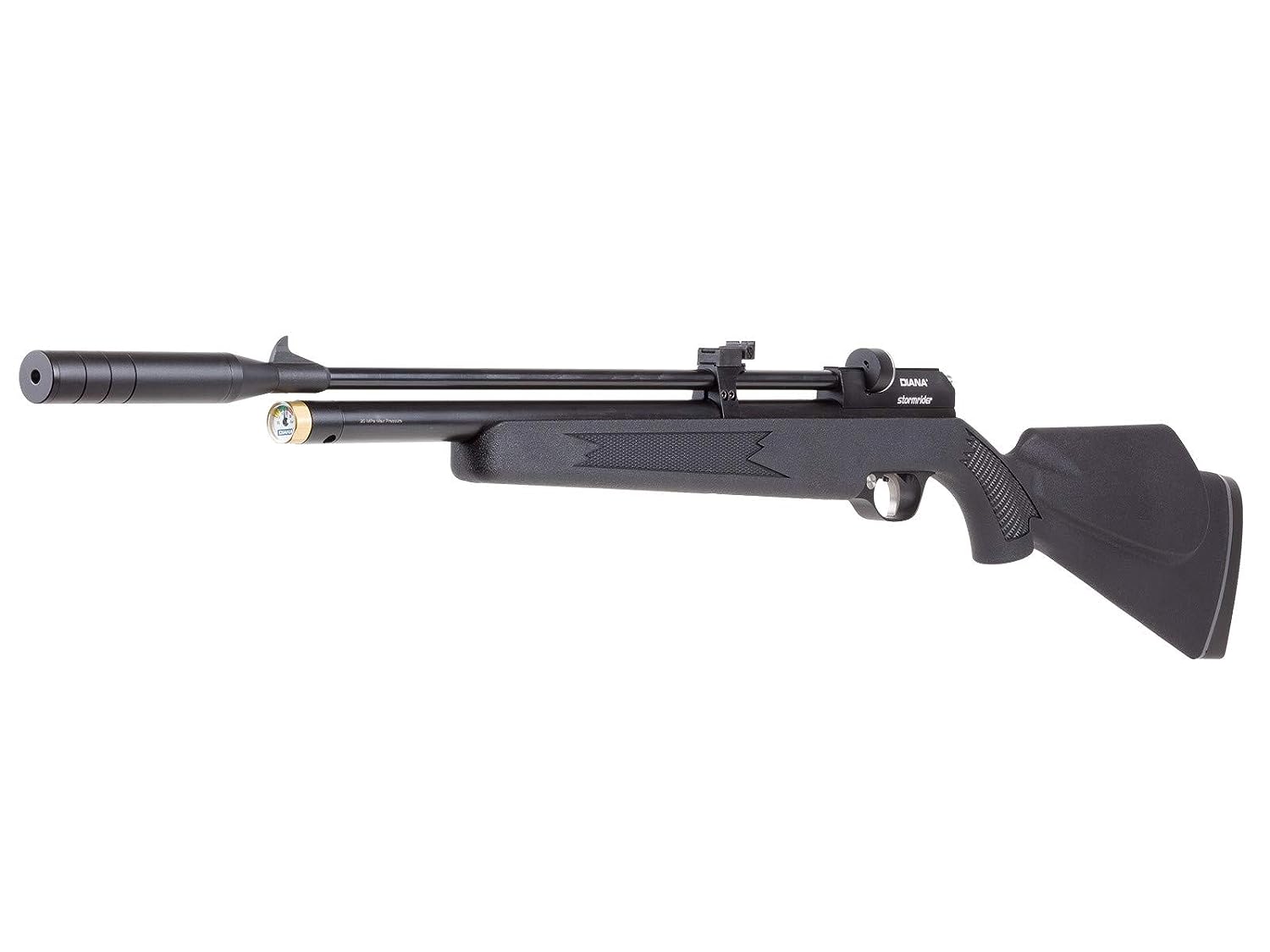 This PCP Air Rifle shouts quality and it certainly doesn’t give the impression of an entry-level PCP Air Rifle.

The main feature here is its repeating shots capability. Just load up the rotary magazine, slide it into the breech and you can fire 9 shots with .177’s and 7 with .22’s, in rapid-fire.

An absolute stonker of a PCP Rifle at this price point!

There’s a lot of things I like about the Raptor.

Available to use with either .177 cal or .22 cal pellets it’s probably best known for its Whisper noise reduction technology that really helps to keep the noise down. Ideal if you’re new to Air Rifles and don’t want to scare your neighbors!

The Raptor looks fantastic and comes with a 4×32 shockproof scope. It also has a great smooth action trigger that’s been developed by Gamo which helps you achieve a more precise shot.

Why I chose the Diana Stormrider as the best budget option?

There isn’t a great deal of PCP Air Rifles to choose from at this price level but that doesn’t mean you can’t pick up something decent. All of these rifles are very good, make no mistake about that.

Initially, I was tempted by the Whisper as I do love the simplistic looks of it, the silencer and the cute scope. However, for me, the Diana Stormrider takes pole position.

It has a great name behind it and has been tried and tested as probably the best rifle in this category at this price point. I loved its rapid-fire ability and it’s very well constructed.

Whatever you choose though, I can guarantee you won’t be disappointed!

Why I chose the Crosman Benjamin as the best PCP air rifle?

If you choose any gun from the above you’re getting quality, without any doubt.

The Bulldog was fantastic but it’s most definitely aimed at a certain audience. What I liked about the Crosman Benjamin was the fact that they accommodate dual-fuel.

Some people will be put off PCP Air Rifles due to the refilling process. If you don’t happen to live near somewhere that you can obtain a CO2 re-fill then they remove this inconvenience by allowing you to fill with normal air.

This is awesome and that combined with its looks and very cheap price makes it my personal favorite.

Best Air Rifles for a Woman