Oh, the joy and frustration of buying a new Air Rifle Scope. Or even buying one for the first time! You start with that feeling of excitement that you’re going to buy something new and excitedly start looking online. That excitement quickly turns to almost despair at the vast amount of choice there is out there. How can you possibly decide which Air Rifle Scop to buy?

Despite being involved in this sport for a long, long time now I still felt exactly like this when I decided to replace a stock scope on one of my son’s rifles.

Another problem was there were sites out there that recommended scopes but I either didn’t agree with them or didn’t believe them.

So, this is why I decided to create this short article. For people like me and my son who just want a reliable recommendation for a good scope.

I’ve made it as simple as possible really, I’ve split this into two sections. A ‘budget’ scope for those that don’t want to spend a lot of money and then my recommendation for the ‘best scope’.

I haven’t listed dozens of scopes on here as that’s not what you need. You just want to know what Air Rifle scope I’d recommend, and why.

How did I choose? It was based on the below:

So, in summary – any of the scopes listed on this page is quality and you won’t be disappointed with any of these on your rifle!

Buying a budget scope isn’t always a good idea and buying cheap will usually cost you in the long run. But, not always it seems. I wasn’t even going to have a budget section but I rather liked the Barska, so here it is.

There’s more to the Barska than just the price though. Designed for an Air Rifle, this AO scope has a variable magnification of up to 12x, which you’ll probably never need but is nice just in case.

It’s waterproof and fog proof and has a Mil-Dot reticle. Unlike other budget scopes, this one not only has the usual windage and elevation adjusters but also accommodates parallax deviations.

You do need to bear in mind that this is most definitely an entry-level scope and you won’t get the built quality on something twice as much of course. But that’s common sense and not all of us want to spend that kind of money.

All-in-all though, this is a great scope for the price. 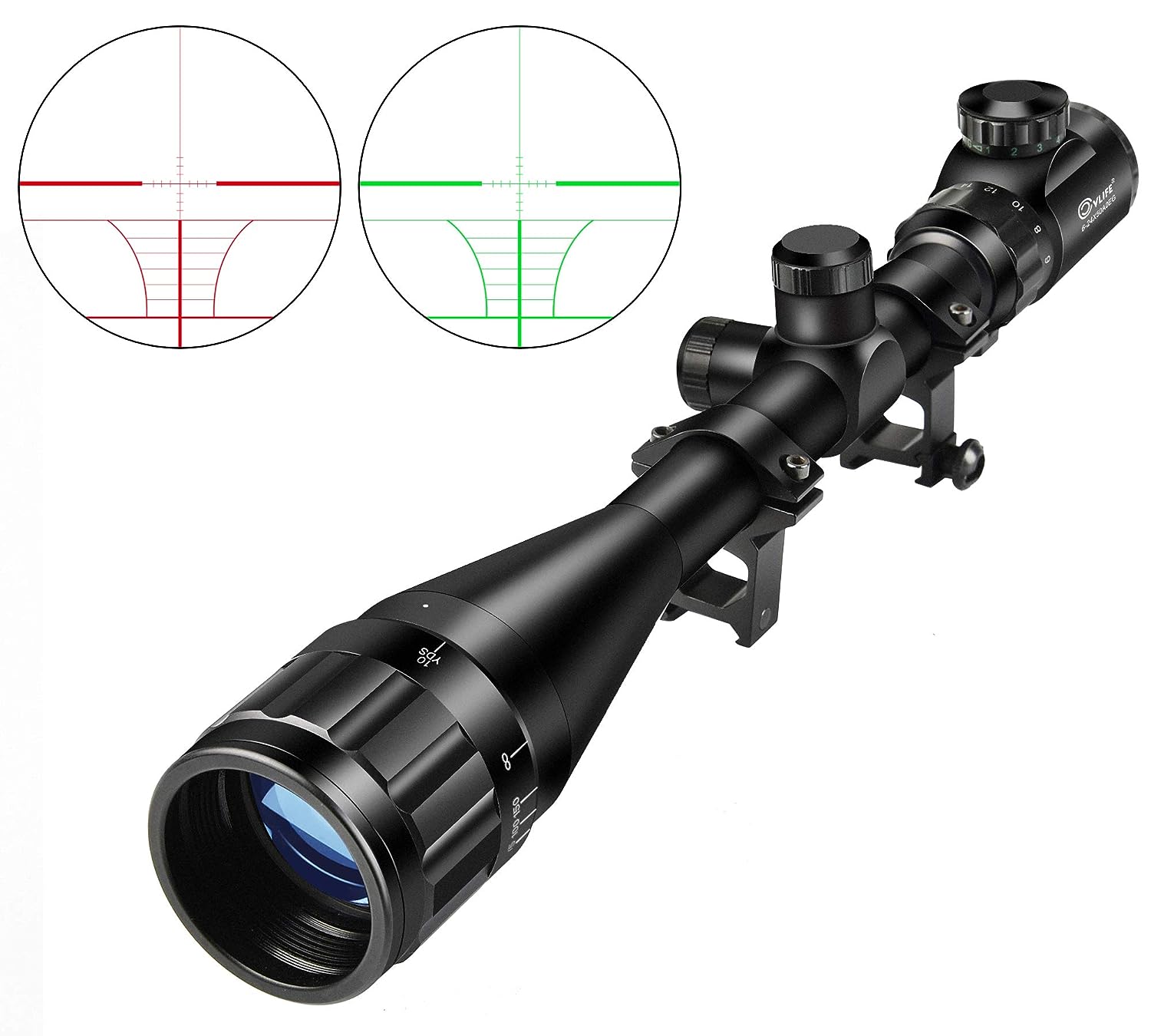 Another very cheap rife scope, only to be used for rifles that haven’t cost you an arm and a leg.

The CVLife Hunting Air Rifle scope is not short of options and I had to double-take when I saw how much it is now. It certainly wasn’t that price a year ago so you do get a good scope for your money!

Capable of magnification from 6 to 24 times via a 50mm objective lens the optics of this scope are surprisingly good. You’d think at this price you’d just get the basics, but no.

An illuminated (red or green) reticle is also a feature here that you don’t find on more expensive scopes. Note that the mounts (that come with it) are for a weaver dovetail rail only.

I chose the CVLife Scope as my recommended Budget Air Rifle!

For a budget Air Rifle Scope, there are simply too many reasons not to ignore the CVLife Hunting Rifle Scope.

The fact that it has adjustable magnification up an impressive 24x (even though you probably will never need this), illuminated reticle and a large 50mm objective lens is pretty impressive by itself. Then you factor in how long the scope has been around for and how many positive reviews it has received.

Finally, you look at the price – they’re basically giving it to you. It costs less than a family trip to the pizza place. If you’re after a budget scope, you simply have to try this one first! 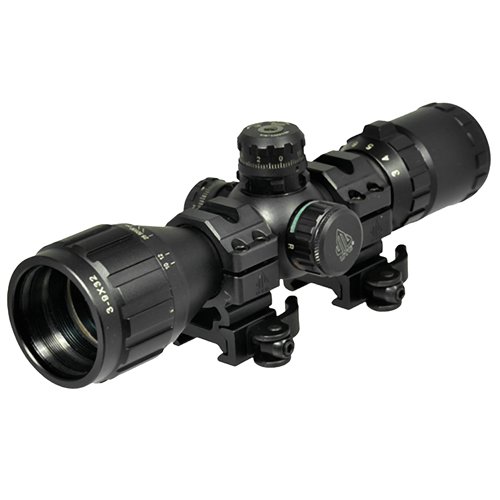 The UTG BugBuster is a quality scope and won’t cost you a fortune. You get a hell of a lot for your buck with this.

The URG Bugbuster is a sealed, nitrogen-filled, shock, rain and fog-proof Air Rifle Scope. You have the option of illuminating the internal mil-dot reticle either red or green which is not typically found on scopes at this price-point.

The positives don’t stop there though, the UTG is not short of power, letting you use from 3 to 9 times magnification and is usable from about 9 feet to infinity.

It can be used on a Picatinny 21mm rail and has windage, elevation and parallax adjusters. You also don’t have to worry if you have a Spring-Piston.

This scope has been tested under much worse conditions than the double recoil found in your springer. It’ll work just fine which is more than can be said for a lot of scopes out there!

There’s a lot of things I like about the Crossfire II.

It comes in a few different configurations but the one I would recommend is the 4-12×50 magnification version. This gives you enough power to hit that distant target but isn’t too much for when you want to have some fun in the back-yard doing a bit of plinking.

The reticle is a Dead-Hold BDC and you’ll also be pleased to know the Vortex has long eye relief, which can (and is) a problem on some other cheaper scopes.

I chose the UTG BugBuster as my recommended Non-Budget Air Rifle!

I’ve known about the UTG BugBuster for quite a while now. Mainly because so many people at my local club use one. I’ve had a good look at it myself and have asked the owners about it.

Certainly, for those shooters that own mid-priced rifles who have one of these on them, their response when I asked them why they used it told me a lot. Simply put, they asked me to find something better without costing the Earth. So, I tried. I looked for a better alternative.

An alternative that had the features and quality of the UTC and wasn’t four times as expensive (which many were). I found nothing. I don’t think there’s anything that touches this at the moment.

When I then looked at online reviews, well, that was it – for instance, check out the reviews on Amazon for this thing – they don’t really need me to say anymore!

Need To Know More About Scopes?