If you’ve just started shooting you may be under the impression that your choices are simply limited to the caliber of the pellet and although arguably, you’re broadly correct it’s actually far from the truth. Depending on what you’re shooting and what you’re actually shooting at, will dictate what type of ammunition you should be using. It’s one of these questions you don’t know exists until you have an airgun and find out a little more about the sport.

Below, we will look into what each type of pellet is typically used for so you can buy the right type! 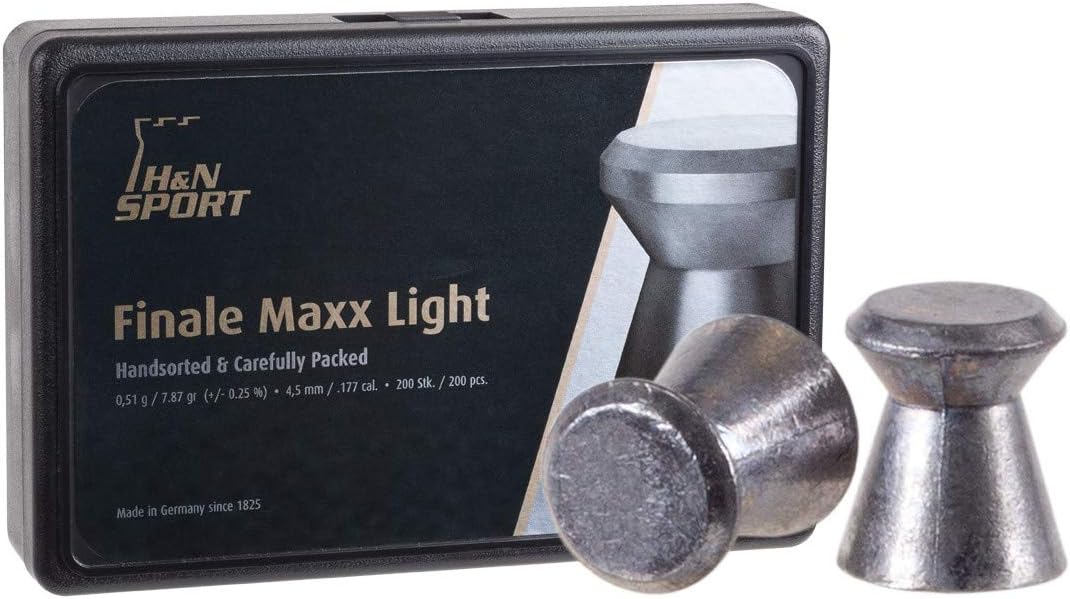 If you’re primarily shooting targets then they Wadcutter may be the ideal choice for you.

If you haven’t heard of the term before, plinking refers to basically having a bit of fun shooting. What I mean is perhaps stacking up some tin cans in a pyramid or shooting in your garden at a target.

For me, this is actually what I enjoy best, having fun with my son in the garden shooting old tin cans and plastic bottles filled with water. If this is the kind of stuff you want to do then the Wadcutter pellet is probably for you.

They had quite a large round head which is great at ripping holes in targets. You won’t have any doubt where you’ve hit when you’re shooting with these. Well, unless you shoot through the hole that you’ve just made. Which is what I tell my son I’ve done whenever I miss the target entirely by the way. Hopefully, he’s not reading this!

They are quite cheap for your basic variety for garden usage but if you want to compete in tournaments with these (sometimes they mandate the use of the wadcutter) then you’ll find they cost considerably more!

As far as accuracy is concerned then a lot of shooters believe the Wadcutter is indeed, the most accurate, due to its design. This is why they have been used in so many target-based competitions. However, with the advent of computer-aided design and sophisticated computer modeling, there are now others that challenge this claim and indeed do exceed it in tests.

They are very popular as they are light, very fast and as they are manufactured in large quantities they are also very cheap to shoot. Because of this, most airguns use Wadcutter pellets when testing their airguns during the manufacturing stage.

The ideal distance for this type of pellet, as you can probably gather is around 10 meters, it is at this range that the pellet performs at its best. When the range gets beyond around 20 meters the pellet will start to lose a lot of its velocity and accuracy.

For game shooting, it needs to be quite close and the game should be small – however, it’s a good pellet for this range and for a lot of amateur hunters their preferred pellet. 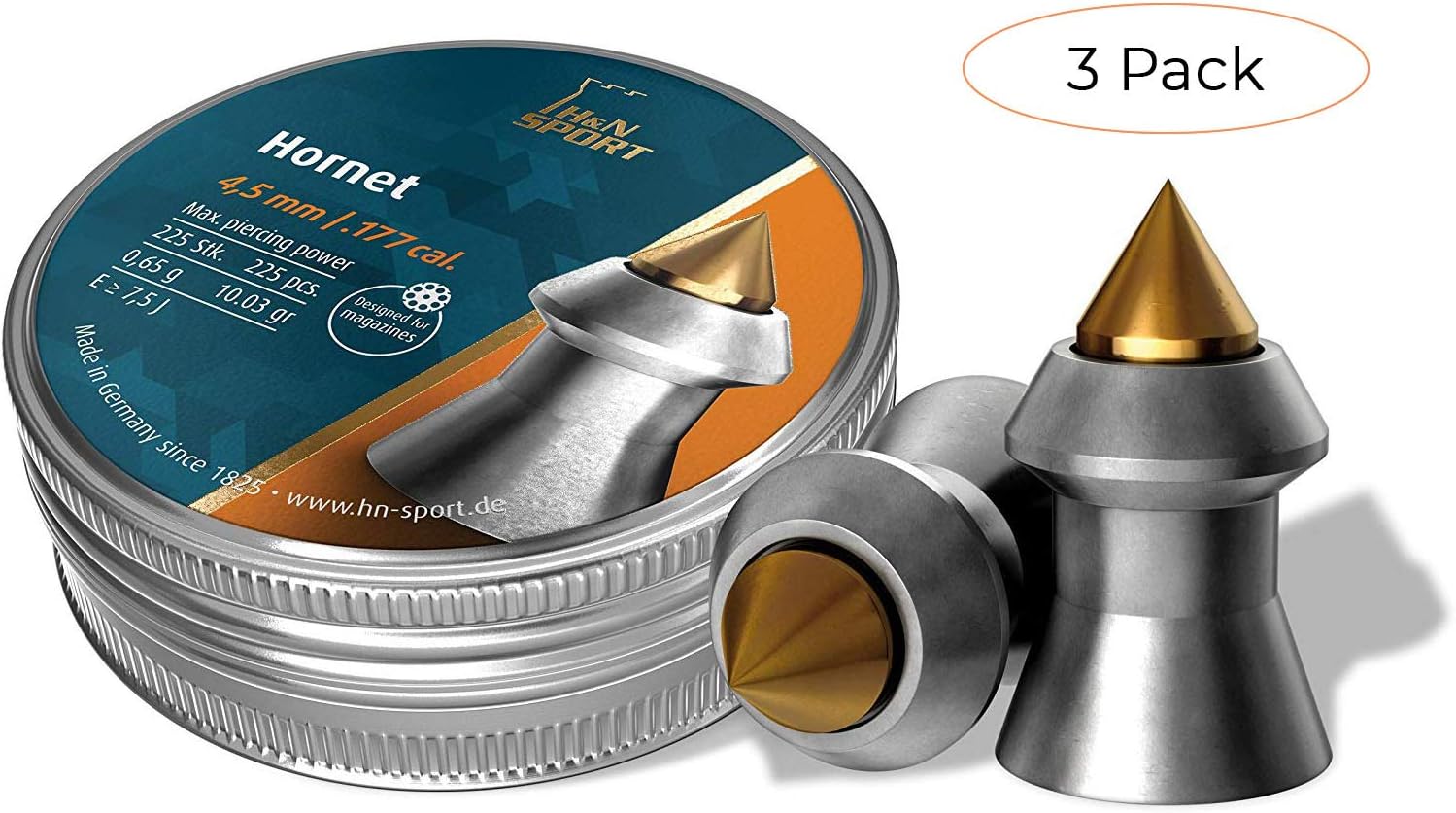 The pointed pellet is, errr, pointy. Similar to the domed pellet, they are quite aerodynamic so they will keep their velocities for longer than the Wadcutter and can be relied on more to hit the target at medium ranges.

A medium-range pellet that is able to penetrate the target at larger distances than the Domed pellet due to its shape. Also due to this (actually, it’s due to its shape in the middle section of the round), the pellet will spin and therefore keep flat for longer than others.

However, note that there isn’t just one kind of Pointed pellet. Different manufacturers will put their own features on them depending on what they want the pellet to achieve.

A great pellet to be used in a pistol as they’re light enough to retain velocity but aerodynamic enough to push them further then they would if they were more rounded.

You’ll find the pointed pellet actually works best in the low to medium powered airgun and actually don’t work that well in higher-powered airguns. In essence, a great pellet for medium to long-range and is designed to penetrate your target, which it can due to its sharp point and aerodynamic features. 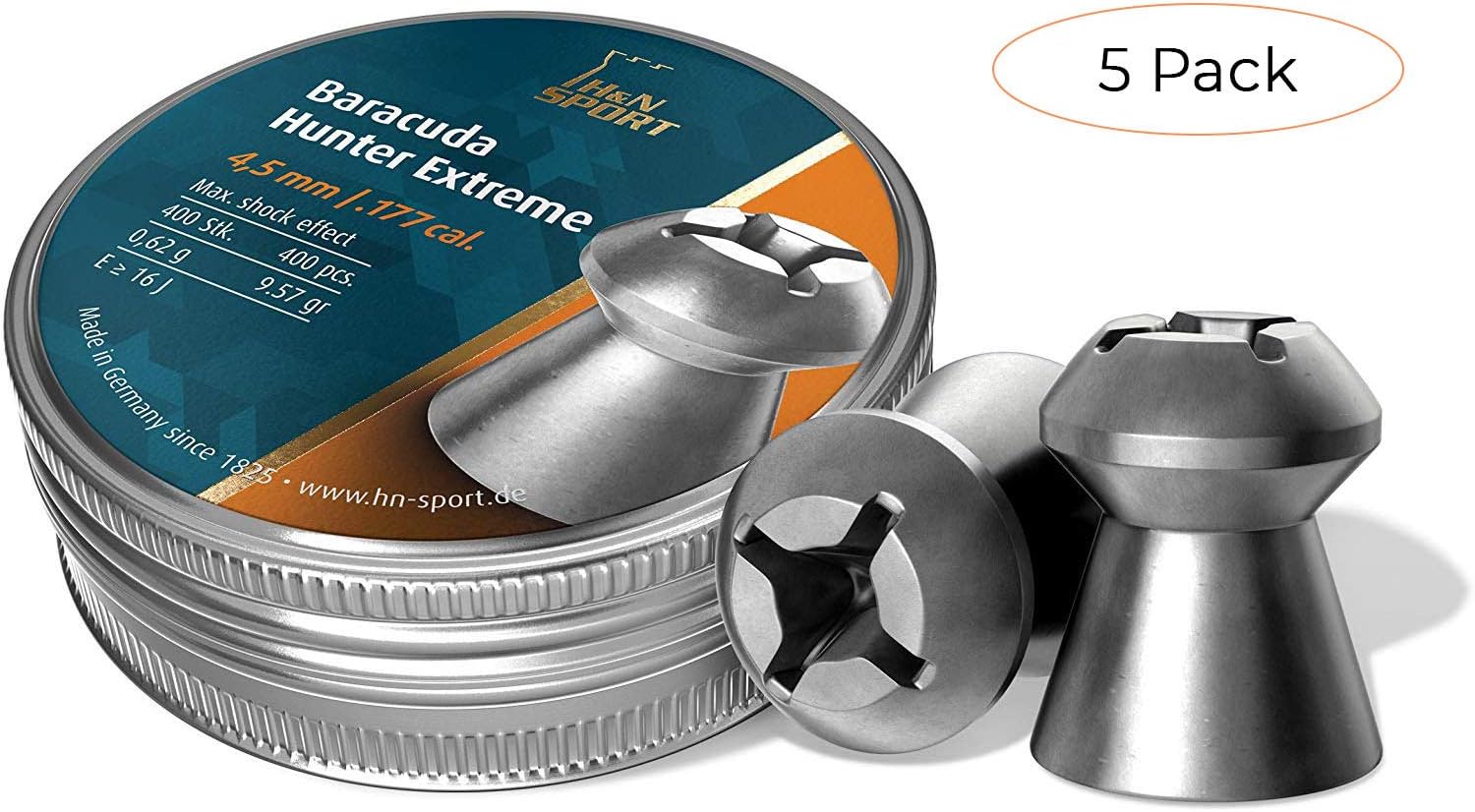 The Hollow Point pellet is what you’d expect from its name, a pellet with a hole in the tip, giving it its hollow point name.

When this pellet hits its target it will expand and it is this that mostly causes the stack-load of damage you’ll see when one of these hits. A great deal of energy is lost when the pellet penetrates the target and this energy has to go somewhere and when you’re hunting it will cause quite a bit of destruction.

You might expect them to have some mass behind them given their purpose but actually, they’re quite light – lighter than the Wadcutter.

The problem is though, for the pellet to do its expanding, it needs to be traveling fast. If the target is some way away you may find the velocity has dropped off too much for this expansion to take place and you’d have been better using either domed or pointed pellets instead. Close range though, they’re practically unbeatable.

You should be aware also that when shooting the Hollow Point at longer distances, accuracy (grouping wise) can be impacted. This is primarily due to airflow being disrupted do the hollow nose, which will make it traverse off track sometimes. Keep the distances short. 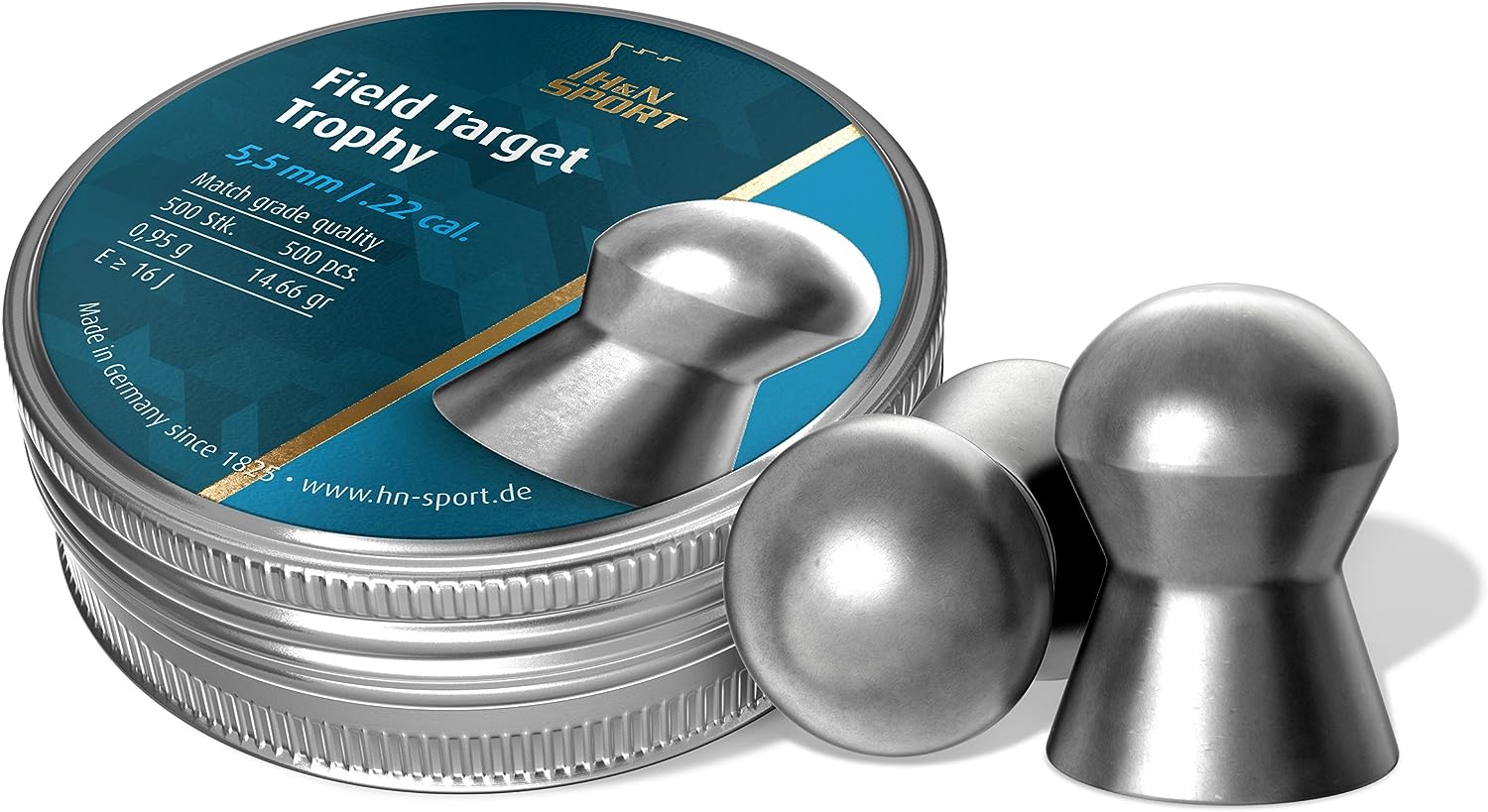 The Domed pellet (also known as round-headed, because of its rounded nose) is more aerodynamic than other types. Because of this, they are able to cut through the air cleaner and keep their velocity for longer distances, which in turn means it will hit whatever you’re aiming at harder at targets that are further away than the Wadcutter can manage.

They fill an area where the Wadcutter falls a little short – you can still have fun plinking with them but over longer distances. Also, another advantage with these is that if the conditions outside are a bit more windy than usual you’ll find the Domed pellet is more accurate than the Wadcutter.

Although the Domed pellet wasn’t designed especially for hunting, it can be used for this and if we make the assumption that your airgun has enough power then you’ll find they pack quite a punch. The main reason for this is that firstly, they have more mass than the Wadcutter and secondly, they’re more aerodynamic.

So, as you can gather from this, the Domed pellet is quite versatile so if you’re after an all-round pellet, then this may well be the best choice for you. However, remember they are well-suited for the higher-powered airgun. They are a popular pellet though, which is great as they’re also quite cheap. This High-Velocity Pellet typically looks different from your conventional pellet. Most will have a small plastic casing around it and the reason for this is that this casing creates a very tight seal within the barrel. This means less air is lost when firing and more of the air can be used to propel the pellet down the barrel.

The fundamental thing here is that they are designed for maximum speed! They are the Bugatti Chiron of pellets, as far as speed is concerned that is. Not the multi-million price tag, that would be crazy.

Designed to be used for the more powerful of airguns, this pellet can reach speeds of approaching 1,300 FPS and some have been recorded even higher than this. This is due to aerodynamics and the materials the pellet is made of (typically, light-weight metals). Because they’re fundamentally lighter than most other pellets, they travel faster. However, do note that these pellets can be quite unstable during flight.

If you are interested in shooting this kind of pellet then the general rule is you get what you pay for! You may save yourself some money by opting for the cheap variety but if you do this then there’s a good chance your pellet will start tumbling all over the place during flight and end up nowhere near where you are targeting! The longer the distance the more inaccurate these cheap pellets will be, so you know what to do!

For the professional shooter, there are some powerful airguns available to you that need a heavyweight pellet. Actually, at this point, it’s no longer a pellet but more of a bullet at this point. They have more mass, so are heavier (unless you’re shooting on the Moon), they’re aerodynamic and are quite brutal.

You obviously can’t use them in any gun, you need a high-caliber air-rifle but boy can they stop a target in its tracks. There are different caliber airgun bullets available to you, even down to .22 caliber level. Typically though, this isn’t the case.

These Bullet-Pellets may not be legal in many places and you can hunt and take down large animals with these things. Most of the time these just aren’t necessary but you should be careful when looking at PCP airguns as they might just take bullets as opposed to pellets. Always check what type of ammunition your airgun takes!

The below table summarises what we now know. Note that as the hybrid could take the form of different types of pellet it’s not possible to quantify its parameters, hence why we’ve marked it as ‘N/A’.

So, there you go. If you have any more information about any of these pellet types I’d genuinely love to hear from you so please drop me a comment below!

One last thing, it’s a question that comes up time and time again – don’t be tempted to dry-fire your airgun! If you’re not sure what I’m talking about here then check out this article to understand why. If you’re wondering what type of air rifle you should buy, then take a look at this article to help you decide.