The airgun (or air rifle) typically shoots pellets or ball bearings (known as BB’s). If you’re choosing an airgun and don’t know what type you should be looking for then you may end up buying something that is totally inappropriate for you or for the environment you’re shooting in (or for the thing you’re shooting at). It’s not possible (in the vast majority of cases) to switch between calibers once you have acquired your gun so best do the research before you buy.

So, what is the most popular airgun caliber? The most popular air rifle caliber is the .177 (4.5 mm), followed by the .22 (5.5 mm and 5.6 mm). Typically, the .177 is a great caliber for shorter-range targets and training but is also used extensively in competitive shooting. The .177 pellet is the preferred choice for those with less room to shoot than others. We will examine this and other related subjects below.

Let’s first, briefly, take a look at the different types of ammunition available for the airgun. There are a few options available to us depending on what we want to actually do. For instance, you’ll need to decide what you’re looking for in a gun – e.g. if you want the greatest range of guns available to you, high rate of fire, accuracy, etc.

By far, the most popular type of ammunition for any airgun is the pellet. Actually available in several different shapes but primarily consists of the head (where the majority of the mass is) and the hollow tail.

The pellet is typically constructed from lead but can also be found made from tin or a combination of several metals. These pellets are available in several different calibers (which of course we discuss later) and are bought in tins with around 400/500 included (depends on the caliber).

Now in the second spot to the Pellet, the BB used to be the most popular ammunition type. They’re usually made out of lead or steel and are basically a small sphere. The BB is good fun for short distances and most commonly can be seen in the .177 caliber variety.

Due to the fact that they are round, they spin once fired and so drift off-center quite quickly. They are great for a first gun though and getting children interested in the sport. Also, can be seen to be used indoors frequently as the conditions are better, no wind means accuracy is increased.

The slug is quite a new addition but isn’t widely used as yet. More commonly found in higher-velocity airguns, they need more power to overcome the initial friction but have nicer aerodynamics so they tend to be more accurate and have a greater range. Shares more similarities in shape to the BB than the traditional pellet though really.

There are other types of ammunition that are known to be used as projectiles in airguns (such as darts) but they’re not common and don’t really give any advantage over the standard ammunition so aren’t found much. 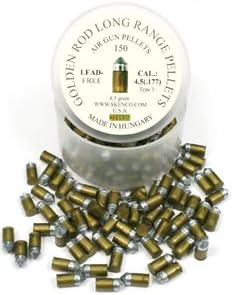 The most commonly used pellet, the .177 caliber pellet is not only a great round for casual shooting and training but is also used for professional target shooting up to a range of around 10 meters and is also used at Olympic events.

Actually, for around three-quarters of a century, the .22 caliber was by far the most popular pellet in the US. It was only around 40 or 50 years ago when airguns from Great Britain and the rest of Europe (who used the .177 primarily) started becoming popular in the US that this caliber overtook the .22 in usage.

There are some good reasons why the .177 is the most popular. There are more different types of pellets you can use for airguns that accommodate the .177, you’ve just got far more choice. Also, the pellets are cheaper than the .22 and you get more of them in a tin. In fact, the price difference tends to work out between 25-35%, it makes a difference. 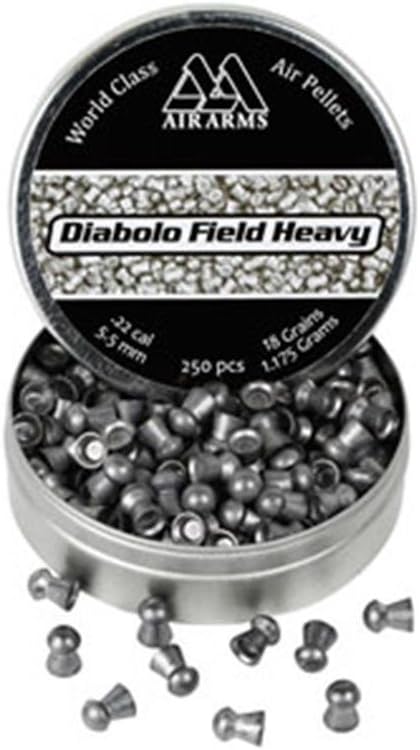 The .22 caliber is typically used more for hunting as it has more mass to it and therefore slightly better-stopping power. Many people take it for granted that the .22 is more powerful than the .177 and this is indeed the case. In fact, it’s usually around 20-25% more power in any gun over one using the .177’s.

Does this mean it shoots further? Not necessarily, the .22 weighs around twice as much as the .177 so it requires a lot more power to get the thing going.

The .177 is no use when it comes to hunting. Assuming it’s over around 10 meters, it’s equivalent to prodding whatever target you’re shooting at with a long stick. Maybe that’s not quite fair, the .177 can be used for hunting but the target needs to be close and you need to be accurate.

The .22 carries a lot more energy into the target and therefore has more of an impact when it hits.

If you’re using an airgun for hunting you’re more than likely to want a .22, if you have a .177 you’ll probably end up switching to the .22 after the first hunting session.

There are some other calibers worth a mention, although they’re hardly mentioned they do have their uses. You will be severely limited on what weapon you can use if you go for any of these though.

If you’re new to the sport then this isn’t really relevant at all, only if you’ve been using airguns for years and find the .177 and .22 just aren’t fit for your purpose will you start looking at higher caliber ammunition.

Which caliber is the most accurate?

It is a good question though and for a long time (about 30 years if I’m honest!) I personally thought the .22 was the most accurate. I never really questioned why I thought this though.

The truth is, no caliber is inherently more accurate than the other. It depends on the environment where you’re shooting.

The .177, as we mentioned earlier, is used by professional bodies (including Olympic events) for international 10-meter shooting. The truth is that .177 airguns (well, target airguns) are more accurate at this particular range. Much longer than this though their accuracy will drop-off due to them being lighter.

Typically, the rule is that if you have a low-powered airgun then you shouldn’t be using a heavy bullet, only use these in higher-powered weapons. It will become apparent why you should do this if you try it out, the low power combined with the extra mass in the pellet will mean your range is significantly impacted and also will become more susceptible to being influenced by the wind.