For anyone who either owns an air rifle or is thinking of getting one, you’ll eventually (trust me on this one) get round to buying a new scope. But what types of air rifle scope can you get and are some better suited for tasks than others?

Depending on what type of rifle and scope mount you have will dictate what type of scope is best suited for your rifle. You will need to choose whether you want a fixed or variable magnification, read the below to understand more.

Before You Buy – Understanding the Basics

What is an Air Rifle Scope?

Just to make sure we’re all talking about the same thing! I’ll keep this bit short as you will know what the point of a scope is. But, just to clarify – an air rifle scope attaches to a mount on the top of your air rifle. It (theoretically) allows you to hit your target more often and with more accuracy as it magnifies the image as, without one, you might struggle to see it.

Well, that depends on what you’re using your air rifle for. If you’re knocking down cans from 30 feet then you don’t really need one. Actually, arguably it would be a lot more fun without a scope as there will be little to no skill involved at that range (assuming your scope is working of course).

If you’re shooting at targets that are a bit further away though or are hunting, you may decide you want a scope.

There is another reason why some people buy a scope for their air rifle though and I have to say I fit in this category myself. I just like gadgets and tech and I put scopes, rather nerdily, into this zone. Also, as one of my other hobbies is astronomy I’ve always been a fan of glass.

What types of Air Rifle Scopes can you Buy?

There are fundamentally two different types of air rifle scopes that you can buy and they are both related to magnification.

Let’s make sure we have the basics parts of a scope understood first. If yours doesn’t have all these ‘bits’ then don’t worry, not all of them do. Also, some just aren’t important depending on the type of shooting you do.

What do all those bits actually do though?

What’s all this I hear about the Reticle Type?

This just relates to the types of crosshairs that you see when you look through the scope. Rather than me try to explain each one, take a look below: If you’re wondering why there are so many types of reticles, then here’s the main use of some of the more popular types:

Crosshair – the original crosshair, very good for target shooting but can be problematic due to objects being hidden behind the crosshairs themselves.

Duplex – it may not be the original but it is the most common reticle for hunters. The thick outer lines allow them to stand-out and the thin inner lines allow for precision.

Mill-dot – typically used for long-range purposes and the notches allow you to make calculations relating to wind and bullet drop. More for the professional shooter I think, never needed one myself.

Illuminated – although not available on all scopes, many of them give you the ability to illuminate the crosshairs. Personally, I rather like these and just make the lines ‘pop’ a little more.

A lot of people get confused about parallax and just end up leaving the knob as it is. Indeed, if you’re plinking or shooting targets that are close you really don’t need to worry about it. However, so that you know, here’s what parallax is.

Parallax is an adjustment you can make to assist with focusing. Yes, it is different from the actual focus dial near your eye though!

The parallax will change your reticle to the target objective. This means, unlike the focus which will change from shooter to shooter, it is more to do with the distance from the target to the reticle.

The problem arises as it’s really not possible to be absolutely dead-center behind your gun! With your rifle still, looking at a distant target through the scope, when you move your head fractionally left or right your recticle will move around on the target. This movement is known as the parallax shift and your parallax adjuster will allow the recticle to appear on the same plane as the target, eliminating it.

Confused still? That’s fine, sometimes a picture is worth a thousand words and even better than a picture is a video!

What Type of Air Rifle Mount Do You need for Your Scope?

There are primarily three different types:

These form the majority of mounts and look (err surprisingly). Typically, these are around 11mm in width but can vary, sometimes up to 14mm. See an example below: 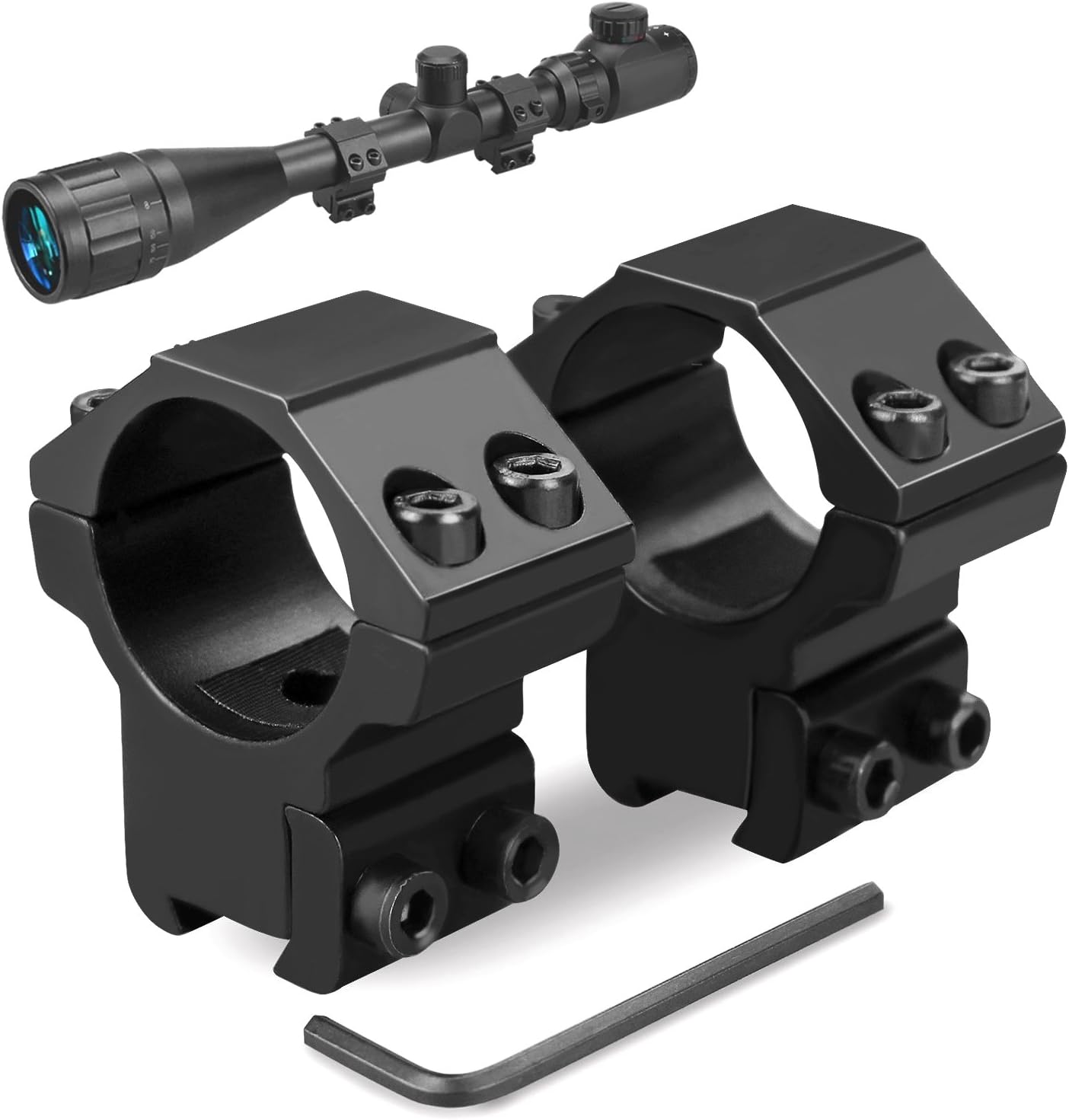 A versatile base that can be used to hold other things, such as a red dot finder, laser or flashlight:

Appearance is that of parallel rails and quite a few slots that are perpendicular to those rails. Like the Weaver, very versatile: 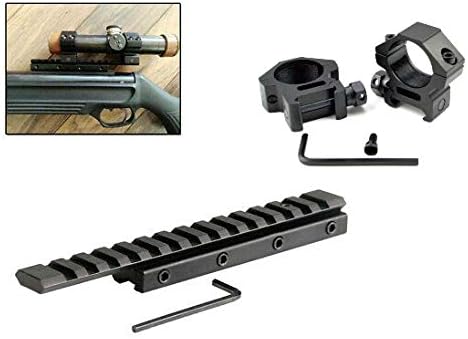 Most of the time your rifle will already have the mount on it. If not, the best thing to do here is to find out which type you need for your Air Rifle, don’t get the wrong one.

I have a Springer Air Rifle, does that change anything?

Funny you should ask that, yes it does. Spring Piston air rifles have more recoil than other guns due to the piston inside being slammed forward by the compressed spring. This recoil can cause problems, most likely inaccuracy if you don’t have the right type of mount.

So, what can you do about this? Well, fortunately, the answer is simple. Make sure your rifle has a one-piece mount (simply put, the mount (which is usually a dovetail) will all come in one piece, not several). This will prevent the scope from moving during the recoil process.

Also, and again related to the recoil on the springers, try and get a mount that has an arrestor stud which will help your scope fix firmly to the rails of your rifle. Depending on what rifle you have it may already come with this though.

Now we know the basics, let’s choose that scope!

So, now we understand all the basics you can get on with buying. Just as a reminder, here are some simple steps you can follow:

Typically, if you have a problem with your scope, this will be it. Discount this before anything else. They are all, perhaps surprisingly, nothing to do with the scope itself.

As so many have spring-piston guns, let’s start here. If you have another type of rifle, then move on to the next point.

Okay, still with me? Right, it’s due to how you’re using your rifle, or to be more accurate, how you’re holding it. Due to the number of vibrations that travel through the gun at the time of firing, due to the recoil, if you’re holding your rifle too tight your muzzle will have moved fractionally before the pellet has left the barrel!  You need to let the rifle rest in your hands softly, don’t grasp it.

Take a look at the Artillery hold for another method. Whichever method you use and feel comfortable with though, stick with it.

If you don’t have a Spring-Piston, then this is the most likely problem. It’s known as ‘scope shift’ but it certainly shouldn’t be as the scope isn’t moving at all, it’s you!

I’ve mentioned parallax earlier in this article but it’s caused when the line between the target, the reticle inside your scope and your eyes moves, not because the target has moved but because your head has moved slightly.

It becomes an issue when you’re shooting long-distance targets and any kind of inaccuracy is a problem. The resolution is, of course, to ensure your eye is in the same location every time he takes a shot. It won’t happen overnight but with practice and by adopting the same hold each time, it’ll come.

Fix this by playing with the elevation control a bit. Yes, you’ll have to zero the sight again but this only takes a couple of minutes.

Though it is not as likely as other problems if you set your scope in the summer months when the temperature is nice and warm and then try to shoot on a Winter’s day then you might encounter a problem. It’s possible that the internal scope mounts have moved slightly due to contraction. Just re-sight and get on with it 🙂

This is otherwise known as ‘canting’ but I have no idea why. It’s basically when your rifle is tilted to one side slightly from the original position that it was in when the scope was zeroed. There are scope levels you can get that will help you with this.

I don’t mean when you’ve eaten too many beans. A side-wind can do strange things to your pellet and just because you’re not feeling much wind from where you’re shooting doesn’t mean the conditions are the same down-range.

Simply put, when the barrel is pointing downwards relative to the rifle scope, this is known as ‘barrel droop’.

You’ll find this is more common with springers although it does occur with other power plants. Rather than rectifying via elevation (which can cause elevation problems described above), get yourself an adjustable mount and set it slightly higher at the back.

Fancy A Scope Yourself?

If you are, then feel free to check out my latest reviews on both budget and regular Air Rifle Scopes.

Alternatively, if you’ve ever considered controlling pests with an airgun (the reason why a lot of people buy an air rifle in the first place) then check out this comprehensive article on it. One last thing, you’ll enjoy this sport a lot more knowing that you (and the people around you) are safe, please check out this article on air rifle safety.